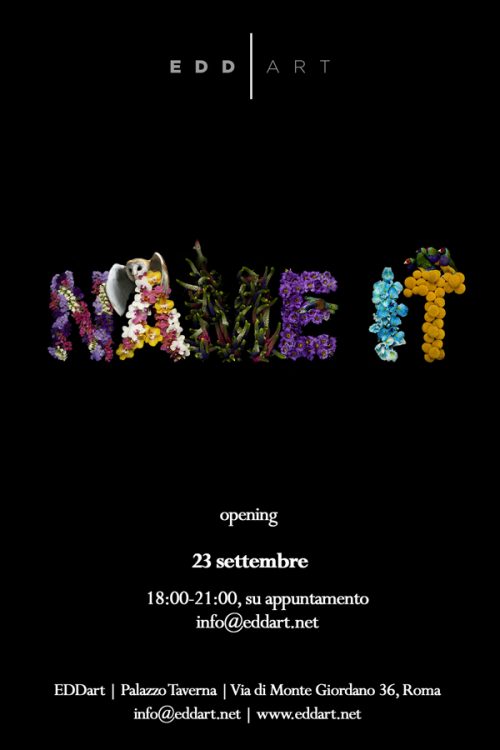 Eddart – From Thursday, September 23 until Saturday, October 16, 2021, EDDart presents in its gallery venue at Palazzo Taverna, Rome, the “Marco Schifano, Name It!” exhibition. The protagonist of the exhibition, is the artist’s most recent photographic research, based on the creation of a ‘utopian alphabet composed of flowers and animals. The project stems from the artist’s desire to give to his daughter a photograph of colored flowers; the idea is to make a child understand, with time, that the perfect aesthetics of the form of the flowers will one day give birth to her very own name. This is the process through which the unreal compositions of Schifano enter daily lives for the first time becoming sounds as well as forms. The aesthetic and illusory search for a new reality is the foundation of his work and the 21 photographs on display, just as the 21 letters of the Italian alphabet, have been created by combining varieties of colored flowers to enhance their aesthetic and visual impact.

BIOGRAPHY
Marco Schifano ( b.1985) lives and works in Rome. Since childhood, his toys were cameras and photographic equipments and growing with them, he experiments his communicative skill. He practices “ camera editing” so that his research on sense and rhythm are blended in his movies ( films): his artistic ( aesthetic) description of the world is reached thanks to many hours of footage and hundreds of photos. His recent photographic work is based on a complex process which foresees a long and introductive research of elements that are interconnected, put together and hence shot so as to give life to iconographies that have been greatly made official. Still life is used to go over the pictorial tradition of still life by means of images that are on the threshold between fact and fiction.